The Carnegie Theatre building in Woorayl Street will not be with us for much longer, shortly to face the wrecker’s ball and be replaced with a 12 storey apartment complex, which will look something like this.

In the Black and White section of today’s Herald Sun newspaper there is reference to a reader having provided an early photograph of the building, which I found on its facebook page. The reader contributed the photograph as an example of the use, prior to the Second World War, of the symbol seen at the top of the façade.

Both that symbol and the year “1920” are gone, but the words “Carnegie Theatre” remain, as can be seen in this photograph from 2015, in its most recent guise as a print works. 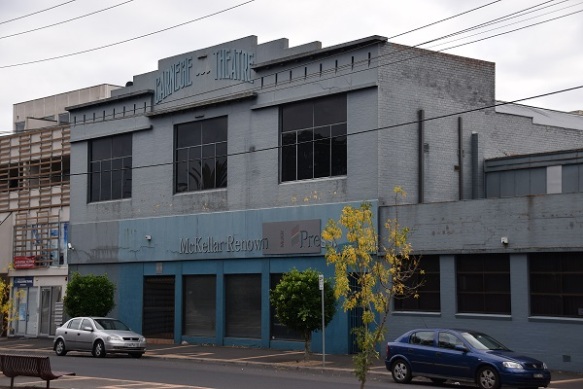 According to this website, between 1924 and 1927 the theatre was used as an ice skating rink, although given the signage in the first photograph, one wonders if it was used as a roller skating rink.  It is also indicated that sound was installed in 1935, which is consistent with this article from The Age newspaper from August 1935, which records that the theatre was being refurbished by its owners, Hoyts, after being closed for some years.  This drawing comes from that article.

The Cinema Treasures website has the following two photographs, which are presumably from a time after that refurbishment.  The façade bears many of the features shown above from the photograph in 2015.

The first website above indicates that screenings were advertised in The Herald until January 1959, with the cinema closing around that time, and an article from 1980 indicating that the building was “to let”.